SHELTON - Batten down the hatches and man the lifeboats because there’s a storm coming as Valley Shakespeare Festival presents “The Taming of the Shrew.” 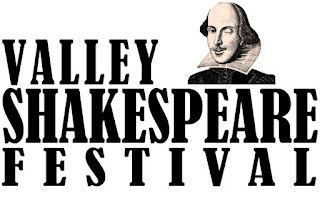 Shakespeare’s wild and raucous comedy about courtship and marriage comes to the Valley for four free performances in Veterans Memorial-Riverwalk Park on the evenings of July 14-17.

The cast of characters includes a shrew (of course!), a boor, a goody-two-shoes, a love-sick boy and a whole crew of confused, conflicted and hapless miscreants all on board to escort you on a tumultuous journey to true love.

The story revolves around two sisters, daughters of a wealthy gentleman in Padua, Italy.
The younger, Bianca, is daddy’s perfect little girl: demure, virtuous, sweet and infinitely marriageable.
The older, Kate, is the shrew.  She is quick-witted, independent and anything but subservient; not the ideal Elizabethan bride!
The problem is that Sr. Baptista (aka Daddy) won’t let Bianca marry before Kate does.
But, as is often the case in Shakespeare and in life, people are not always what they seem.

Jessica Breda, who is playing the role of Bianca, explains:
“I think that Bianca is a strong-willed lady who knows what she wants and how to get it … She’s definitely got some antagonistic qualities, especially when it comes to her relationship with Kate.”
Iris McQuillan-Grace will take on the role of Kate.  She’s played the role before, when she was 10 years younger.
She’s looking forward to giving the character another go:

“I’ve had a long time to reflect on how I saw her and approached her before, and it’s so rare that you get to repeat a role - I’m looking forward to finding new things, especially in her family relationships and how she became the person she is at the beginning of the play.”

These are the kind of sisters who give sibling rivalry a bad name and audience members can count on plenty of sparks flying, hair pulling and cat-fighting!
Woe to the brave men who choose to woo these two!
Lucentio is Bianca’s suitor of choice for husband material and Mitchel Kawash will tackle his role:
“He (Lucentio) comes to Padua excited to travel and motivated to study and within 50 lines he’s fallen in love and that’s all a distant afterthought.
Then he spends the bulk of the play disguised (as a classics tutor to Bianca). Then, all of a sudden, we see him with his father and he’s married!”

Petruchio, on the other hand, is wealthy in his own right, has been to war, and has seen his share of the world and life. He has come to Padua to “wed wealthily, then happily.”
Like Kate, he is quick-witted, sharp-tongued, feisty, knows exactly what he wants and fears nothing and no one.
So, the stage is set for a battle royal – or two! Who, if anyone will prevail?  Come on out on and decide who you will root for!
All four performances are free and open to the public and begin at sunset, around 8 p.m.
Audiences are invited to arrive up to two hours early to picnic and enjoy family time in the park prior to the show.

This is a press release from Valley Shakespeare Festival, a non-profit theater company dedicated to bringing free and low-cost theater to the lower Naugatuck Valley and its surroundings.